Focus Air draws on a wealth of knowledge and experience to provide our learners the very best in professional pilot training. Unlike other flight training institutions, we recognise the importance of a nurturing approach as we develop our graduates with skills sets to meet industry requirements. We believe in sound principles of careful preselection assessment of candidates and considered and thoughtful training that prepares graduates for the workplace. Our KUSA training module based on the latest global trends in training sets us apart from other service providers.

A new flight school was launched at Virginia Airport last Friday. The school is the brainchild of Durban North resident Fathima Khan who said she enjoyed flying so much she decided to open her own professional flight school which would enable all trained pilots to be of service to those who are in need, especially the ill, injured and those who are in life threatening situations.

“I am delighted that this is the first flight school that will cater for the under privileged and also strive to develop students into highly knowledgeable and safe private pilots,” said Khan.

The passionate Khan said this project will be the mother which will bare fruits in creating jobs and opportunities for the youth. “I came from a small town and now that I am in a strong position, I want to create jobs for people who are still disadvantaged. In my case, I can train people for jobs which carry a strong salary. I want to make lives better.” she added.

In his role as CFI Jon brings with him a wealth of experience from a flying career that spans more then 40 years, 12 of which he has been a fulltime CFI. As an accredited examiner and holder of an Airline Pilot Licence he has the knowledge and skills to ensure that Focus Air continues to train their pilots to the highest standards. As an accredited Assessor and Moderator registered with the Department of Educuation he understands the importance of well structured courses work facilitated by well trained instructors. Jon is particularly passionate about and strongly believes in the value of human perfomance and CRM training. As such he has written a number of unique and ground breaking courses that integrate these important skills into the flight training process from the outset. In an industry were mistakes have grave consequences Jon’s disciplined and thoughtful approach to flight training makes him a valuable asset to Focus Air.

At Focus Air we are mindful that historically there is a relatively high drop out rate in pilot training. We also appreciate that there is considerable cost involved on the part of the sponsor. With this in mind we have a compulsory preselection process designed to identify suitable candidates. The preselection process follows the steps as listed below.

To ensure that people development is a core element of Focus Air. To provide a high level of personal attention to our customers that caters for their individual training needs. To treat our clients with respect and understanding and conduct all communications in an honest and straight forward manner. To obtain full accreditation with the Transport Sector Education and Training Authority.

To create a culture that strives for excellence and nurtures the qualities expected of a Professional Pilot by providing the highest quality flight training in a professional and safe environment.

Focus Air recognises that the optimal growth and advancement of South Africa’s human capital, is one of the crucial elements in the success and sustainability of the country. Focus Air is therefore committed to providing a high level of education and training in the field of aviation and plans to assist with the national context of critical skills shortages, unemployment and poverty by partnering with local, provincial and national government, in order to facilitate skills development for marginalised South Africans. 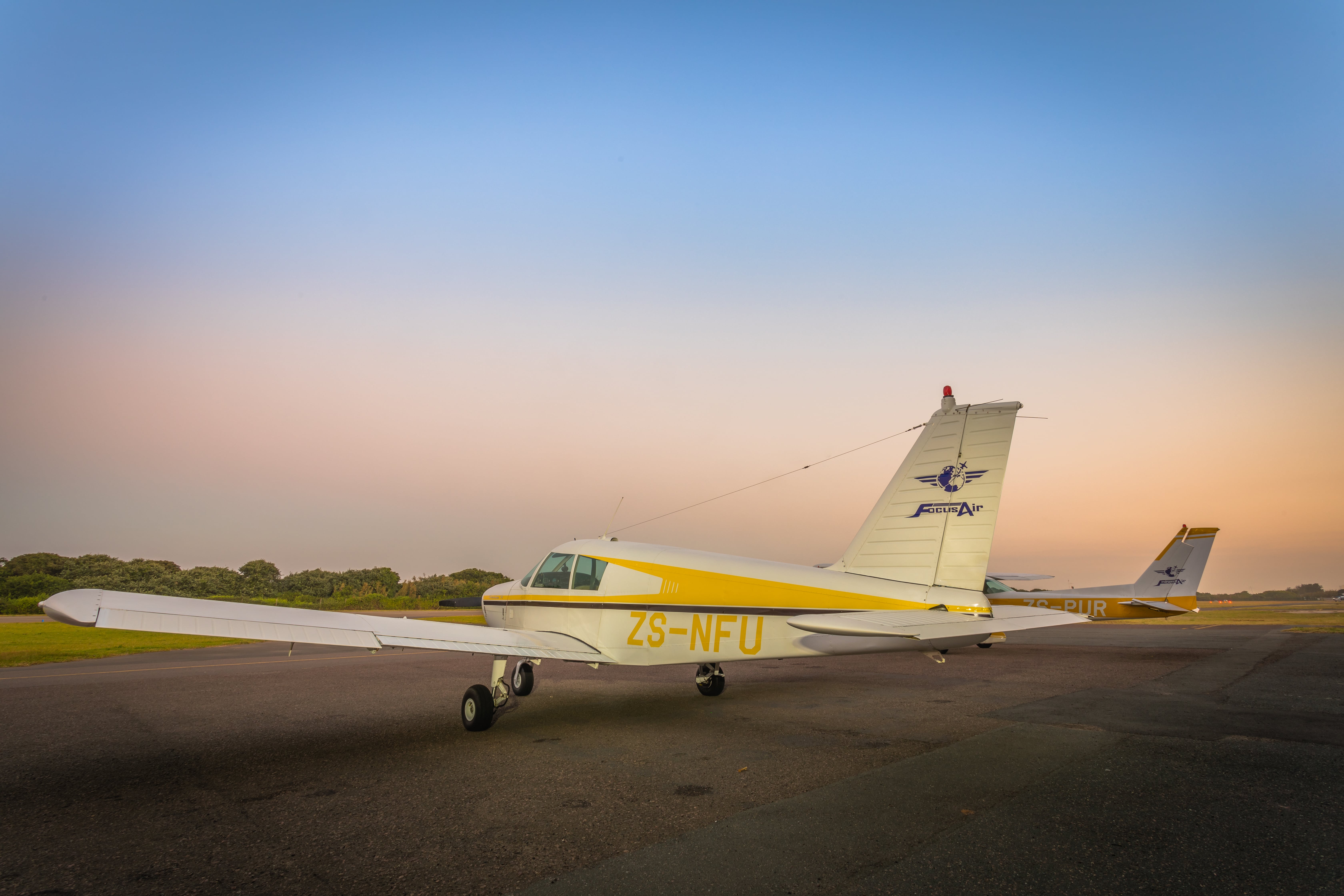 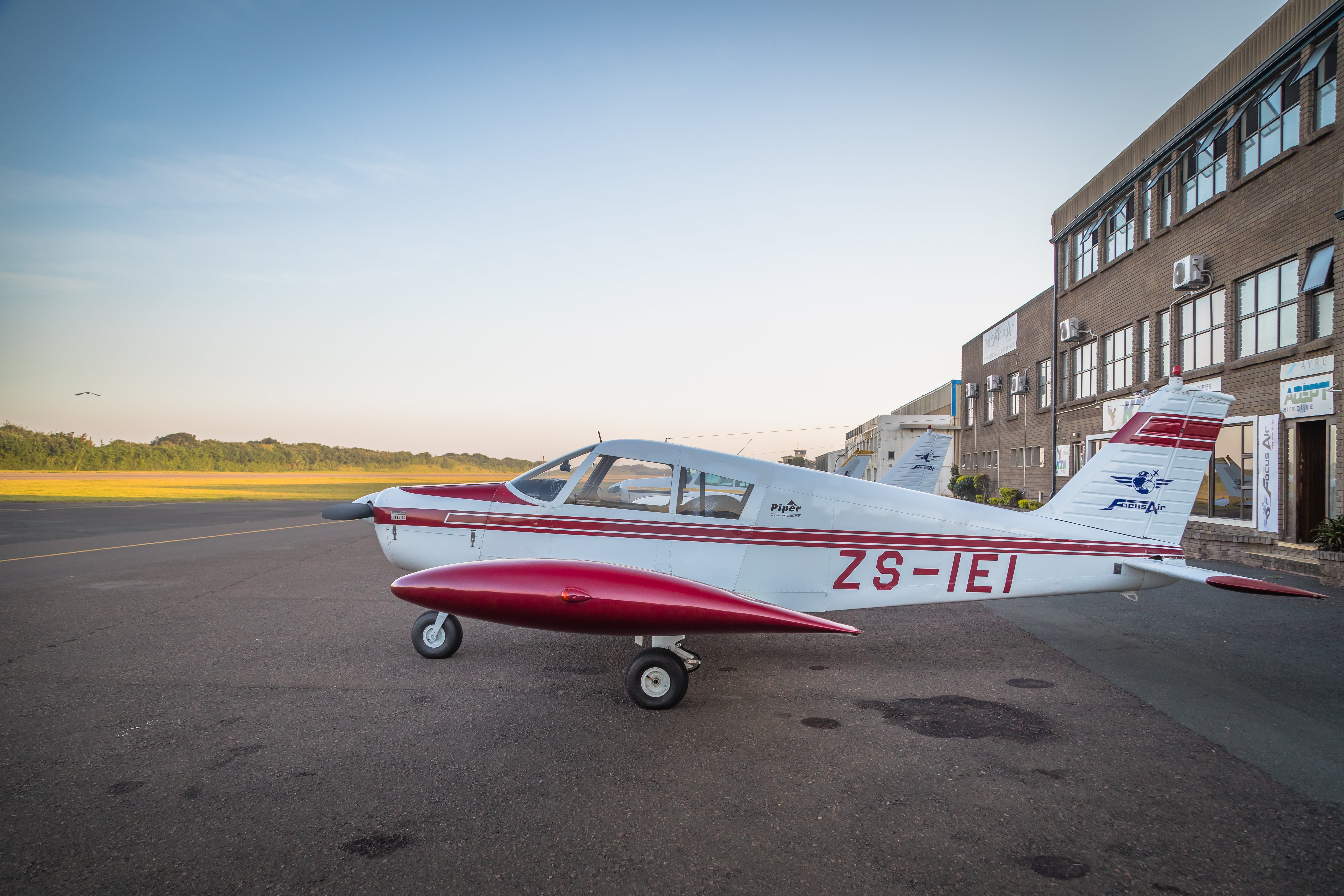 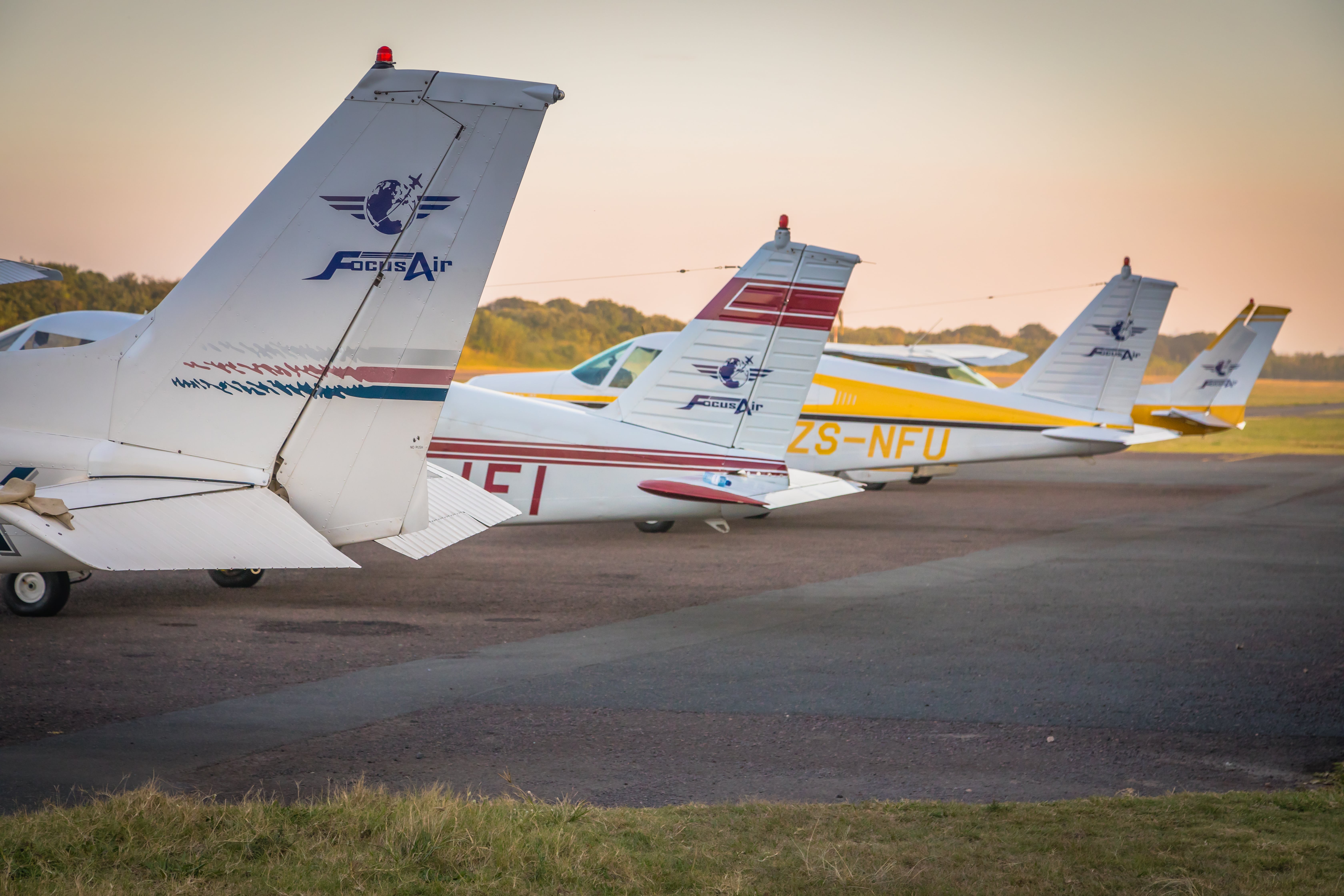 No, we do not offer this kind of financing. Our services and flight training are on a cash up-front basis.

Due to the high number of grant and scholarship requests we are unfortunately not able to offer this kind of support for any of our students.

The course is structured to prepare students well before their first flight. However the better prepared you are the greater will be your progress, this will continue to be the case all the way through the training process.

If you want to prepare before the course consider buying the Pilots Handbook books one and four and read up on chapters It is also advised to complete the written test on your training aircraft as soon as possible.

There is an extensive checklist in the front of your training file with regard to books and other equipment. Besides the items on this list you should consider buying a headset. Focus Air does have a limited number of headsets but these are quickly used up at busy times.

Those pilots who are training toward their CPL are required to wear a uniform comprising of a white pilots shirt, navy pants (avoid using fabric that may be flammable) and black leather shoes. On passing the PPL flight test epaulettes with one gold bar should be worn.

Those pilots holding a night rating should wear epaulettes with two bars and three bars for CPL pilots.

All other pilots may wear what suits them, shorts are fine to wear particularly in the summer months. Wear sensible shoes, avoid shoes with heavy or thick soles, a thin rubber sole is best. Do not wear slops.

Focus Air epaulettes and wings should be removed when leaving the airfield, and never worn in the Wings Club or any other bar on or off the field.

In a nutshell airmanship is all about having the right attitude toward piloting. It has been said that airmanship is not just knowing what the right thing to do is but then actually doing it.

Here are some examples of good airmanship:

At all times conduct yourself in a professional manner, and be considerate of other aviators.

We have already mentioned the weather but there are other reasons for possible delays. Aircraft will break down; due to the nature of flying even the most seemingly inconsequential of problems will result in an aircraft being grounded. This can prove frustrating but at Focus Air we expect the highest attention to flight safety from all our pilots. If an aircraft has a problem it is ‘Snagged’ and grounded until the fault has been attended to and the aircraft has been signed out as airworthy by an engineer. If you are at all unsure about any kind of defect simply cancel the flight.

All of our training aircraft receive an extensive check and service every 100 hours; this is known as an MPI. The MPI may take as little as two days to complete but depending on the work required may take longer. We do our best to rotate aircraft and plan for MPI’s but this does not always work out.

Without a doubt the winter months of June, July and August offer the clearest weather. September and October are the windy months of the years, so much so that many flights will be cancelled. October through to December is the wettest period of the year and January and February although drier offer regular afternoon thunderstorms. Despite the rain, wind and storms the Durban climate offers some of the most consistent flying weather in the world and very few days are lost altogether through the year.

See the Examination and Study guide for more information. Do not neglect your preparation for the various examinations in the course. As a rule of thumb if you are planning to take six months to complete the course you should be studying one hour a day. A full time student looking at a two to three month timeframe should be studying two to three hours a day six days a week. Are the exams hard, yes, but if you put the work in you will pass.

First of all the syllabus is flexible and designed to suit the individual student’s schedule. The minimum number of hours required to hold a PPL is 45; most students however complete the course closer to 50 hours. It is true that the more often you fly the faster will be your progress. A maximum of two flights per day and a suggested minimum of two flights per week will ensure that you are current and keep up with the course. At Focus Air we understand the value of thorough pre-flight preparation. All students receive extensive briefing before each flight designed to optimise the flight lesson. Despite the pre flight briefing it is still essential; that you read up and prepare yourself for each lesson. Your attitude toward the flight training is the most important ingredient of all.

So to answer the question it may be possible to complete the course in as little as three months for a full time, dedicated student. For a part time student flying twice a week six months is a more realistic time frame. Remember that for every hour you spend in the air you will need to spend two to three hours on the ground studying and preparing for flights. Your progress will also depend on other factors such as your natural ability, the quality of your preparation and your understanding of the theory.

The history of Virginia airport begins a few decades ago, when the only airport in Durban was at Stamford Hill. All commercial and light aircraft landed there, but once South African Airways started flying DC-4s, it was time to move the main airport to where it is now, at Durban International, then called Louis Botha airport.

The light aircraft fraternity decided that Stamford Hill airport was too big for their needs and it was time to look for a new home. Mervyn Gild (then a Durban Councillor) owned a Cessna 182 and invited Mike Hartley (then chairman of the Durban wings club) to fly with him and look for a new site. Flying along the coast, just north of the Umgeni river mouth, was a prime site that looked ideal, as the wind direction was either down or up the coast.

The new airport was opened in 1959. Situated at the extremity of the suburb of Virginia, it naturally took the name; Virginia airport.

At that stage, there were no houses nearby, and Mike remembers that they could then have quite easily extended the runway another 500 metres, but as it could accommodate a Dakota DC-3, what more did they want?

Two hangars were moved from Stamford Hill to Virginia, and some smaller buildings were built. Those same hangars are still being used today. The airport was opened by Mayor Shaw in June 1959, and the grand opening was commemorated by an air race, which ended at Virginia airport.

At that stage, about 50 people worked at Virginia, including ground maintenance staff, which has since grown to about 250 people, working in all spheres of aviation: from airport management staff to aircraft maintenance.

Initially, Durban Wings Club had its own aircraft, used for training. The club trained many young pilots who are still flying today. As time went by, the emphasis changed from training, to a club for its members. Now some club members would like to see the club obtaining a small aircraft, such as a Piper Tri Pacer, that can be easily maintained and used by club members for training.

Today, Virginia airport, or as it is affectionately known in South Africa as HMS Virginia due to its short runway and closeness to the ocean is a busy training airport and a base of a number of charter companies. Due its closeness to the beach, landing and taking off from Virginia is always a thrill, and its closeness to Durban international makes Instrument and advanced training cost and time effective.